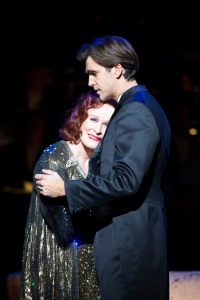 Based on Billy Wilder’s film of the same name the production is orchestrated by David Cullen and Andrew Lloyd Webber. Despite a slipped disc and cold, Close did not let your audience down, receiving standing ovations.  I was perhaps not as enthralled as most of the audience, a packed house, on my visit. However, it is probable that they came to see the star rather than the production.

With the orchestra on stage in the background throughout the production the story tells of  Hollywood in 1949 and the world of silent movies. Impoverished screenwriter Joe Gillis, played by Michael Xavier, stumbles into the reclusive world of faded silent-screen goddess Norma Desmond. She sees an opportunity to make a comeback while at the same time he is seduced by her luxurious lifestyle. 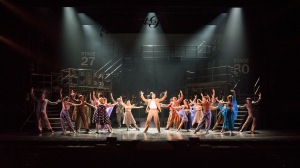 Travel journalist who enjoys discovering new places in style, where possible, with her dog, a Coton de Tulear, called Poppy. Good food, not necessarily gourmet, is important as is the atmosphere as she also writes about restaurants. Culture is another love, and as she is based in London, she reviews theatre and art exhibitions.
View all posts by Natasha Blair →
This entry was posted in Culture, Theatre, Travel and tagged Glenn Close, London, theatre. Bookmark the permalink.