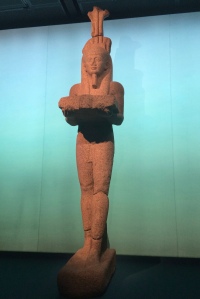 Statue of Hapy, Egyptian god of the Nile flood
Thonis-Heracleion

Be prepared to be bowled over by some of the objects on display at a new exhibition at the British Museum Sunken Cities: Egypt’s Lost World which opens today, Thursday May 19, 2016.
At the end of the 1990s two cities Thonis-Heracleion, an international port, and the city of Canopus near Alexandria were discovered, submerged beneath the Mediterranean sea. Only a fraction, around 5% of the sites which date back 1,300 years, have been explored. Some of the finds which include statues of gigantic proportions are on display at the museum’s first large-scale exhibition of underwater archaeological discoveries. 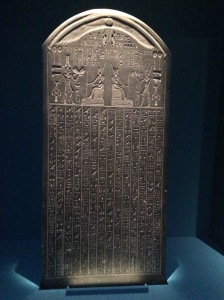 The exhibition explores the importance of major cities through these treasures together with pieces loaned from Egyptian and British museums. 300 objects have been brought together including more than 200 finds excavated off the coast of Egypt near Alexandria between 1996 and 2012. These are complemented by objects from various sites including Naukratis – a sister harbour town to Thonis-Heracleion, and the first Greek settlement in Egypt. The discovery at the mouth of the River Nile has transformed understanding between ancient Egypt and Greece.

The exhibition, which is family friendly, runs until 27 November, 2016 with a range of lunchtime lectures and talks as well as evening events. 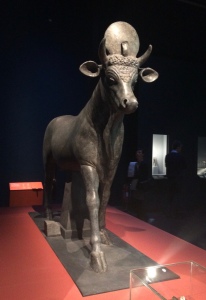 Travel journalist who enjoys discovering new places in style, where possible, with her dog, a Coton de Tulear, called Poppy. Good food, not necessarily gourmet, is important as is the atmosphere as she also writes about restaurants. Culture is another love, and as she is based in London, she reviews theatre and art exhibitions.
View all posts by Natasha Blair →
This entry was posted in Culture, Travel and tagged ancient, britishmuseum, Egypt, Greece, history, London, statues. Bookmark the permalink.